KARACHI: Pakistan’s exports to Afghanistan have clocked two-year highs during the first ten months (July-April) of the outgoing financial year 2017-18.

The figure of Pakistan’s exports to Afghanistan was higher than the $959 million figure recorded in corresponding period of last year.

Pakistan mostly exports food products like rice, meat, wheat flour to Afghanistan but up around 50 percent of flour mills closed down because of low exports.

Historically Pakistani textile products held sway in Kabul, however, the recent perforation of Indian and Chinese products has seen the latter upending the former from its traditional market of unfinished and finished textile products.

According to a Pakistan Bureau of Statistics (PBS) report, rampant smuggling to Afghanistan would mean the size of export could be twice more of what the official data reveals.

Pakistan is a major exporter of pharmaceutical products to Bangladesh, Afghanistan, Sri Lanka and to some African countries as well.

Source of the News: https://profit.pakistantoday.com.pk/2018/06/09/pakistan-exports-to-afghanistan-clock-two-year-highs-touch-1-282-billion/

In a notification sent to the stock exchange on Wednesday, Nishat Mills Limited along with its consortium constituting of Nishat Group and Pakistan’s largest tractor manufacturer Millat Tractors Limited (MTL) with Sojitz corporation would enter the assembly, wholesale and retail business for Korean Hyundai brand vehicles in Pakistan.

The notification said “HNMPL’s total setup cost will be in the JPY 15 billion range. An assembly plant— scheduled for completion in December 2019—is currently under construction in a special economic zone in Faisalabad, Pakistan’s third largest city.

“Sales will be carried out through distributor-owned dealers and franchise dealers, with the goal of reaching 6% market share by 2024,” read the notification.

In March last year, it was reported Nishat Mills had decided to enter into a shareholder agreement with Sojitz Corporation of Japan (Sojitz) for an acquisition of a 40pc stake in the company’s wholly-owned subsidiary HNMPL. Sojitz was stated to be in an equity sharing agreement with HNMPL via an investment of Rs 40m.

The agreement is subject to the grant of regulatory approvals. Moreover, HNMPL had announced conducting a feasibility analysis of setting up a greenfield project to establish an assembly and sales unit for passenger and 1-ton commercial vehicles in Pakistan.

Also, in 2017 Nishat Mills, a subsidiary of Nishat Group had announced venturing with the South Korean Hyundai to set up an assembly plant in the country.

Source of the News: https://profit.pakistantoday.com.pk/2018/06/07/japans-sojitz-corp-to-invest-136-9-million-for-assembling-hyundai-vehicles-in-pakistan/

ISLAMABAD – Pakistan and Russia have finalized a memorandum of understanding (MoU) for conducting a ‘feasibility study’ of the planned undersea gas pipeline involving four countries — Pakistan, Iran, Russia and India.

Foreign Office spokesman Dr. Muhammad Faisal said on Friday that the ministries of the energy of both countries have finalized a MoU for conducting the feasibility study for implementation of the undersea gas pipeline project.
The purpose of the MoU was to assist in providing support for the realization of the project which has been under discussion since last year, he added

The spokesman said based on the results of the feasibility study, the two countries would take a decision for the future of the project.

Moreover, he said that Russia’s keen desire was to promote energy cooperation with Pakistan as the two countries are moving ahead with strengthened bilateral relations, adding that the two countries had concluded various proposals in the energy sector, including construction of North-South Gas Pipeline, import of LNG from Russia, installation of air mix plant and establishing a 600MW combined cycle power plant.

Responding to a question, Dr. Faisal denied that the new project would replace the stalled Iran-Pakistan gas pipeline project. “The IP gas pipeline is a separate project,” he clarified.

Last week, it was reported Pakistan and Russia were all set to formally ink a billion-dollar energy deal for the construction of an offshore gas pipeline and the supply of gas to Pakistan as Russia wants to export gas to South Asian countries.

Source of the news: https://en.dailypakistan.com.pk/pakistan/pakistan-russia-to-conduct-feasibility-study-for-undersea-gas-project/ Pakistan’s first-ever National Center for Cyber Security will be inaugurated in Islamabad on Monday.
It has been established at Air University Islamabad and Interior Minister Ahsan Iqbal is likely to inaugurate the center.

The center is aimed at becoming the leading hub of innovation and scientific research to develop tools and technology to protect Pakistan’s cyber space and knowledge transfer to local economy and training.
The National Center will comprise a number of affiliated labs at various universities.
Air University is also introducing four-year BS Cyber Security program.

The study course is designed to develop students’ strong base in computing and impart to them cyber security skills to design, deploy and manage secure systems as well as to  prevent existing systems from cyber attacks. 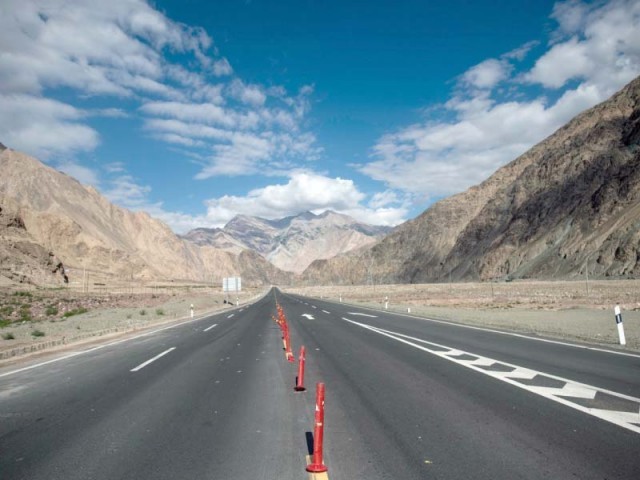 After marked improvement in the security situation, the World Bank has decided to invest $460 million to build a new road from Peshawar to Afghanistan border aimed at bolstering trade between the two nations and creating job opportunities in war-torn federally administered tribal areas (FATA).

The board of directors of the World Bank is likely to approve the $460-million loan next month for Peshawar-Torkham Expressway Corridor project, according to World Bank documents. The total cost of the project is nearly $483 million and the remaining amount will be arranged by Pakistan from its own resources.
The major component of the loan, $383.6 million, will be given for the construction of the road that will have a total cost of $403 million. Another amount of $72 million will be sanctioned for the development of marble and horticulture sectors in FATA. Pakistan plans to build a new four-lane road from Peshawar to Torkham border, as the existing two-lane road cannot be modernised due to various constraints.

Source of the news: https://tribune.com.pk/story/1714445/2-world-bank-invest-460m-road-peshawar-afghan-border/